by rachaelrice on September 20, 2012 in Interviews, web

Huge thanks to Alice Baca of The Cosmic Collage for this interview, please check out her blog here!

Get To Know Rachael Rice a living, breathing dream catcher. 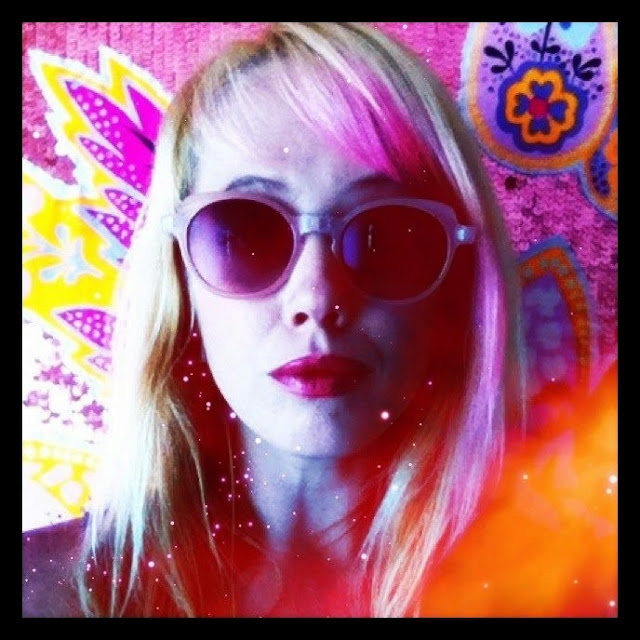 Rachael is one of those wonderful women who leave you a little bit in awe of all the light and creativity that comes through them.  To call Rachael a maker of dream catchers or a musician does no justice to the whole. She is an artist through and through.  I’ve been lucky enough to connect with the multi-talented Rachael  and I am beyond excited to share this interview with all of you! Get to know Rachael Rice of Cosmic American! 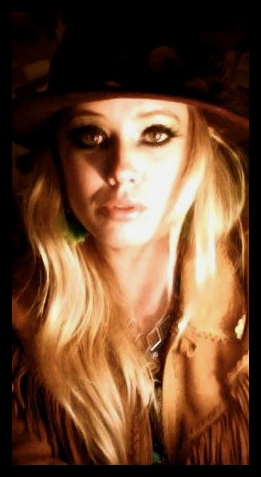 In recent years there seems to be an upsurge in women making things with their hands and expressing themselves creatively in many forms. You do a little of everything! Can you tell my why crafting/ creating is such and important part of your life?
RR: It’s fascinating that the Dalai Lama said “The western woman will save the world” you know?  Also, I’m reading an interesting book called The Soul’s Code, In Search of Character and Calling by James Hillman and it describes the “acorn theory.” This theory states that all people already hold the potential for the unique possibilities inside themselves, much as an acorn holds the pattern for an oak tree. Via Wikipedia: The books describes how a unique, individual energy of the soul is contained within each human being, displayed throughout their lifetime and shown in their calling and life’s work when it is fully actualized. It’s like I can’t help it!
I actually have read that quote! And I wholeheartedly believe it because I’ve come across so many amazing women doing incredible and inspiring things but more importantly helping each other along the way as sisters on the same journey. There seems to be a real sense of community and support of each others crafts. Have you noticed any of that over the years?
RR: I think the new way of doing business is really based on relationships and connection rather than competition. Social media really enables us to find a modern tribe and harness the power of like-minded souls. I try to draw close to those who understand this shift. 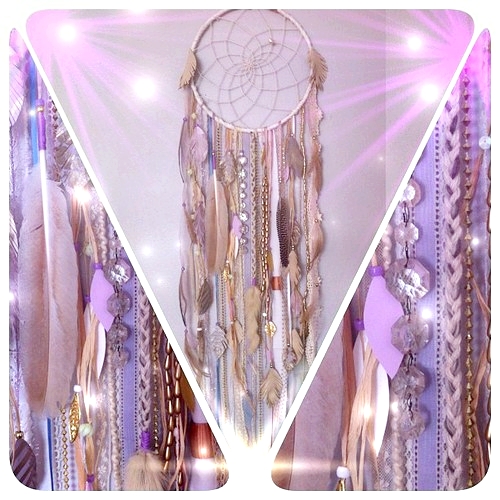 On your website there is a list of classes and workshops that you teach, in a variety of subjects, from making dream catchers, murals, recycled arts and crafts, folk and indigenous arts, just to name a few!  What is your first memory of crafting or creating? Do you remember the first thing you ever made?
RR: My dad recently told me a story that when I was a baby I’d sit and draw on fogged up windows. I remember spending tremendous stretches of time alone trying to figure out how to sew, collaging, painting, drawing, making stuff…I still aspire to those vast stretches of uninterrupted time alone, just working with my hands. 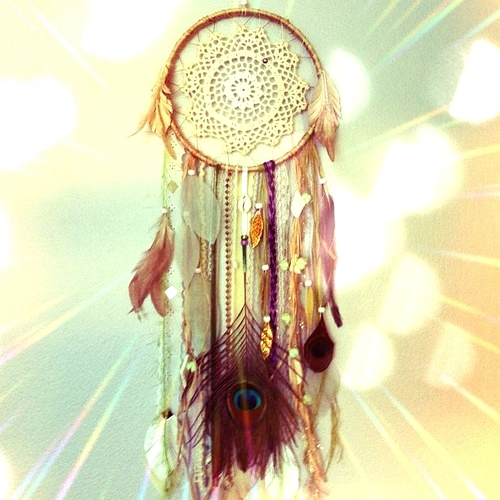 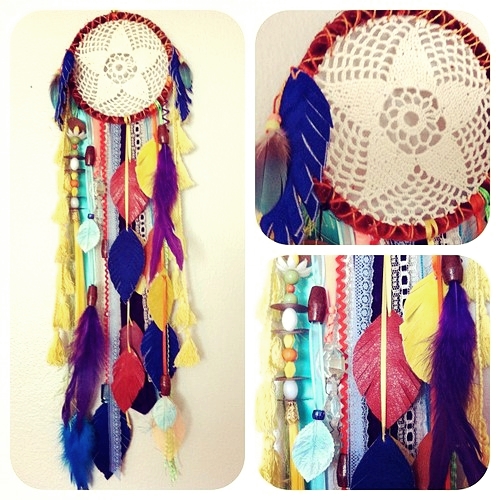 I think it’s great that you teach these arts and keep the inspiration moving forward through those you teach. What do you enjoy most about teaching?
RR: I like having people do things that they’ve been told they’re not “good at” — usually because it’s been shamed out of them somehow, or they’re not identified as an “artist” even though we’re all so creative. I’ve had clients and students get physically ill and panic when presented with a blank piece of paper on which they’re supposed to create Art with a capital “A” — so I have them paint with forks, or Q-tips, or even brooms. Because no one’s an expert at painting with forks. You can’t screw it up, and it levels the playing field so you don’t have to be an ARTIST to make cool art. You can just be having fun making marks.  Um, I also get really excited when people make stuff with their hands and I squeal. A lot.
Can you tell me what you love about making dream catcher in particular?
RR: I love the decorated circle…doilies are like the western woman’s mandala. They’re evocative of everything that makes me feel good: my childhood doing camp crafts in Oklahoma, the hippie era and the attention finally afforded to Native American/American Indian/First Peoples cultures which had been only marginalized or grouped as monolithic instead of diverse and complex (and still is). I mean, I’m still a white girl ripping off other cultures (whether they’re 70’s glam or Tibetan thangkas), so I donate a portion of my sales to Native American Youth & Family Association of Portland (http://nayapdx.org). Just as a token of gratitude. 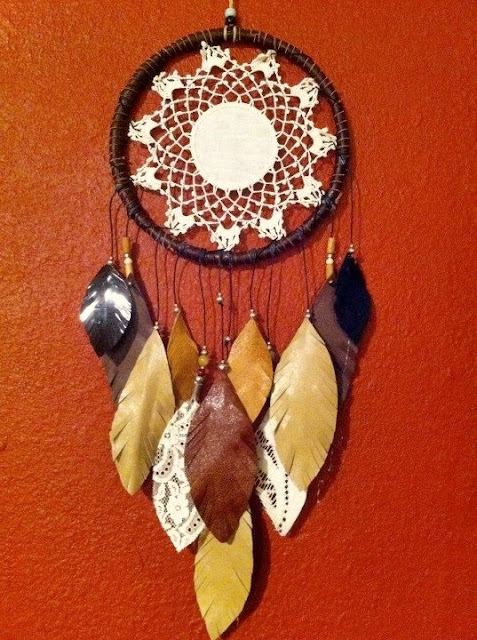 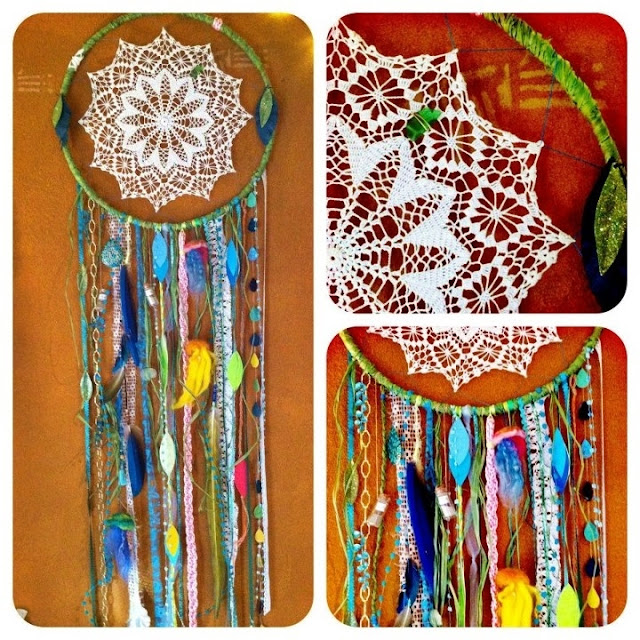 Do you crochet all of the doilies on your dream catchers as well?
RR: I’m glad you asked. No. Some other woman’s hands made them. In all probability they were made by women…like a little time machine to me into the life of a woman in the past.
What are some of your favorite materials to work with?
RR: I’m crazy about paper, and mark-making materials like watercolor pencils, pens, even crayons. I get really excited in office supply and hardware stores — that’s where I used to shop for art supplies because I couldn’t afford the stuff at the fancy art supply stores. So I’d get nylon rope and chains and weird stuff to make jewelry with, or nail polish from the drug store instead of paint. I love found objects, salvaged materials, natural objects, and things that are otherwise destined for the landfill. 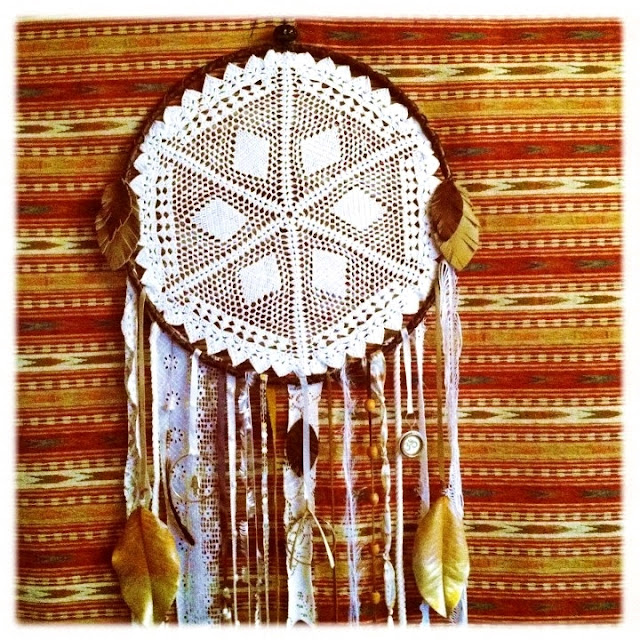 Is there one object or piece of art you’ve made that is your favorite or holds the most importance?
RR: I have a few things of my mother’s that are important to me, like the little March angel she gave me on my 5th birthday. But I’m not that sentimental about objects. I’ve made a lot of stuff that I really love, but I always feel better once it’s released out into the world. There are some journals from my youth I wish I still had, but I don’t spend too much time with regret.
What inspires you in life and/or in your creative process?
RR: I’m inspired by people who have suffered greatly and managed to live engaged lives…who have overcome addiction or trauma or severe depression and still make themselves useful to others and to the world, who remain committed to their creative process in the face of great adversity…people like Frida Kahlo, whose house I visited once. There are a few things I can always go back to and feel inspired: birds and other animals, science and cosmology, the 60’s and 70’s, modern art museums and galleries, certain poets like Lawrence Ferlinghetti, Bob Dylan. John and Yoko. The movie Almost Famous or It’s A Wonderful Life. Salads. Children’s drawings. 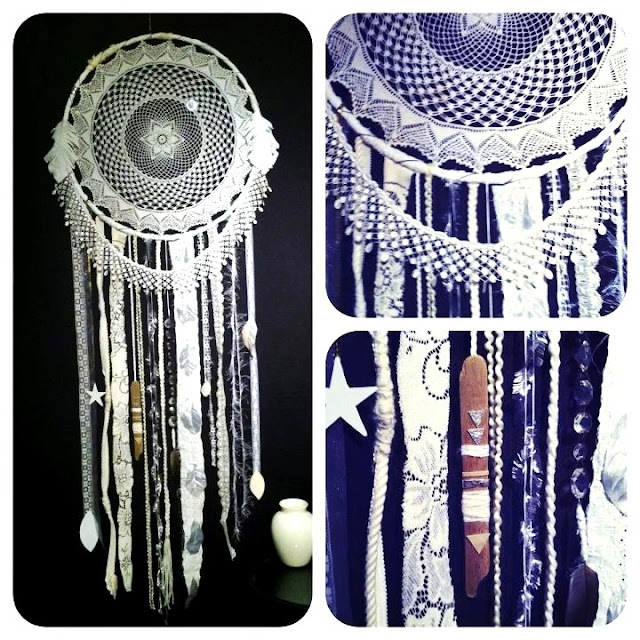 You’re also a singer and multi-instrumentalist.  Tell me about your musical inspirations. Who are some musicians you admire?
RR: Ok, so I grew up in the 80’s in suburban New Jersey when everyone listened to those hair-metal bands, Bon Jovi, and Paula Abdul. I was this huge nerd, playing saxophone in the band and listening to Simon & Garfunkel every night on my Walkman. NOT COOL. I really didn’t like country music because it seemed so conservative and square, and cheesy. But I always loved folk-rock stuff when Nirvana became huge…and somehow I managed to discover Daniel Lanois, who produced huge records like U2’s Joshua Tree but also this album Wrecking Ball by EmmyLou Harris, which changed my life. Then I was living with the manager of a radio station in central Vermont and he got a copy of a Gram Parsons tribute album with a Lucinda Williams’ cover of Return of the Grievous Angel on it and that was it. I was totally hooked on Cosmic American music, which suits my voice (big pipes with rusty edges) and my guitar playing (uhhh simple: three chords and the truth). 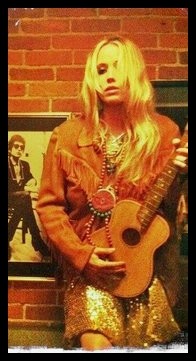 How does living in Portland, which has a great community of art lovers and advocates, influenced you as an artist?
RR: There’s a really amazing folk, Americana, and country-rock scene here in Portland, but I’d like to see more women featured. So I produce shows that showcase women — it’s something I never saw as a younger person and I want women to know they can be just as badass on a guitar as any dude. And that’s more important than being thin or cute or seductive. Being a badass talented female. Events like Crafty Wonderland blow my mind — there are so many talented makers here who don’t give a shit about traditional gallery representation because they know how to use the Internet or a cool warehouse. Like, with Etsy, I sell all over the world and don’t need the approval anyone in the “Art World Establishment”, if such a thing even exists anymore? The indie showcases around here like ADX and dozens of others, plus all the street festivals…the gardens inside pianos on people’s lawns…you can be such an individual, but there’s a sense that we’re all in this together. Like everyone is working towards finding solutions to make life better for us all. 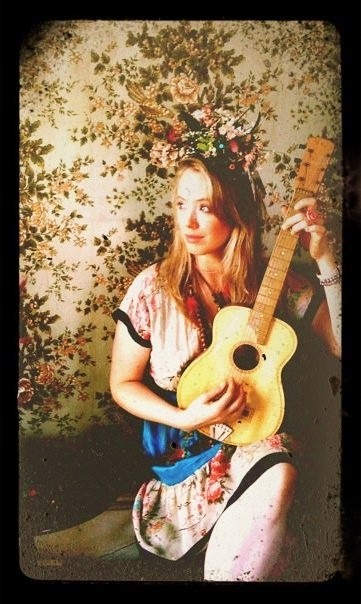 Where would you like to see your life journey headed in the next few years?
RR: I want to do what supports my core desired feelings: being free, being of use, and being inspired. So in the next year I will be launching some online courses so I can connect with a broader range of women who are interested in leveraging their creativity to build their business online. Stay tuned for that. I want to be location-independent, so I can work and teach from anywhere, and travel.  I’d like to play the fiddle. I’d like to touch a very large cat like a lion or tiger. Heal more deeply from past traumas, help others to do the same. Explore the assignments given to me in the form of relationships.  Focus on the solutions to the world’s problems, and draw close to others building the new systems.  I’ll definitely make a record, and try to write at least one more song before I die! Ha-ha!
To see more of Rachael’s work, to learn about her classes or hear her music go to her website here.  Or find her on Facebook and Tumblr!  Thanks to Rachael for all of her time and for inspiring me! xo, Alice

← Oregon Coast
Everything is amazing. →

Going There With Jen Vertanen