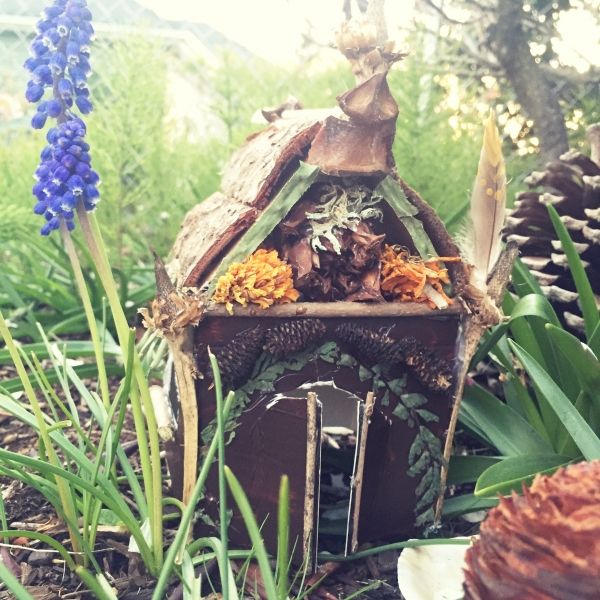 I posted an image of what we called FAIRYLANDIA on my Instagram and I got enough requests for a DIY I put this one together. Thank god the kids in my life are interested in the same wackadoodle epic craft endeavors that I am because I'd rather eat glass than have imaginary tea parties. It all kind of started with looking up graham cracker gingerbread houses on Pinterest. Fucking Pinterest, gah. Anyway, start with some milk cartons and brown acrylic paint. You don't have to be an idiot like I am and use paint that costs $17.09.

I cut the bottoms off with an Exacto blade and scissors. Paint that shit brown. Ha, that sounds like an actual color. Accurate! Let dry for an hour. I had the kids draw with white colored pencil or chalk where they wanted the doors and windows. Then I cut them out with an Exacto because they're total pussies a little young to use Exacto blades. Of course overachiever of the century Florence put plastic on the inside of her windows with petal curtains and added a goddamned window box just to show me up.

We used a lot of stuff we happened to find outside like pieces of bark, sticks, dried flowers, seeds, pine cones, lichen, feathers and such. We cut bark with scissors for the roofs [rooves? Like hooves? Dafuq, English language y u so baffling?] It was fun to finally use the nature ephemera we tend to hoard around here. All the things were attached with a crapload of glue gun glue. I like the low-temp ones. Even the 5 year old could manage it. The rule is you're allowed to burn yourself once, but if you do it twice you're not allowed to use the glue gun anymore. She only got one tiny blister so I call that success. BEAUTY IS PAIN, KIDS -- I always say. We put them outside during a dry spell and made little paths with rocks and the aforementioned hoarded natural items. Ten magnolia pods and thirteen dried zinnia stalks? FAIRY FENCE ACHIEVED.

We took it to the next level with some fake mushrooms from Collage here in Portland and made a banner from paper towels we dyed with leftover easter egg dye (it's fun and doesn't stink your whole living room up at all; You should try that too in your spare time working moms!) which we cut into tiny triangles, stamped with little letters and glued to a piece of string. Totally as hard as it sounds, your littlest one will fuck it up and bawl ::thumbs up emoji:: Speaking of, Lena insisted on writing out in Lena-ese pink scribble on a rhododendron leaf an announcement that all fairies would be welcome there no matter what and that they could stay as long as they wanted and PLEASE PUT IT WHERE THEY CAN SEE IT OR THEY WON'T FEEL WELCOME. And then I may have cried a little.

Pin it for later:

This is dedicated to Janelle Hanchett who I hope feels totally inadequate as a mother by this post which looks also to be the official start of what may be the most stomach-churning set of words on the internet: Mommy Blogging. Barf. I apologize in advance.