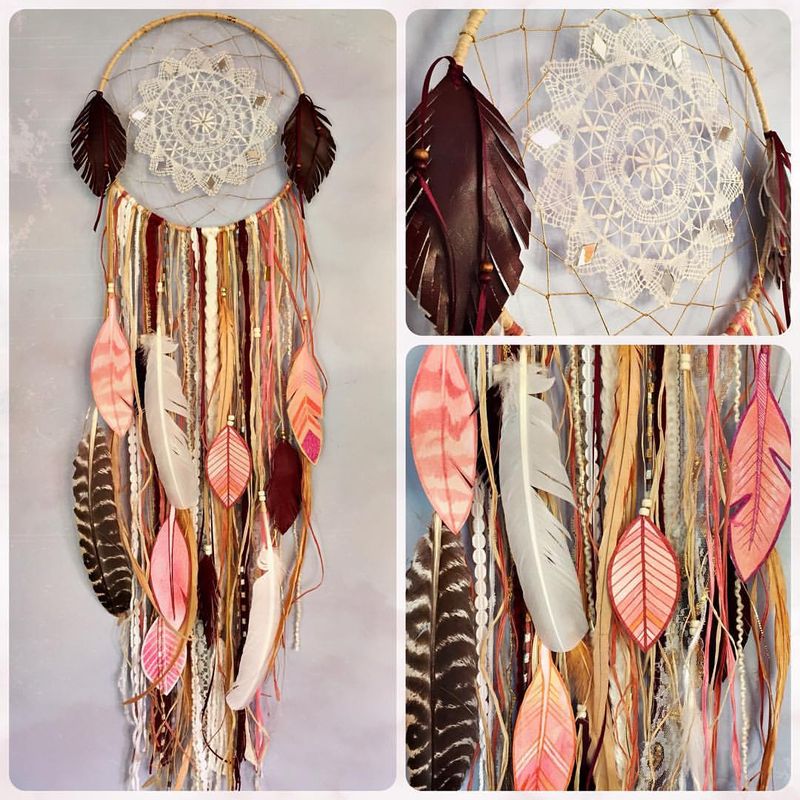 The End Of My DreamCatcher Career

I posted this recently on my Facebook page(s) but wanted to elaborate a bit here, especially about cultural appropriation, which is so much more than something people fight about on Tumblr. One way a bioregional animist friend of mine explained cultural appropriation was to "steal from the ancestors without giving back." It's the practice of one privileged group (often white people) taking elements from a marginalized group (often people of color) as their own, often for profit, often without sharing those profits, and often without credit or compensation in any form to the originators of those said elements. It's a type of colonization, born of capitalism, which was born out of colonization, in which we (white people) are profoundly socially conditioned to view All The Things as available for our consumption simply because we like them and want them for our own.

But just because we like something, or identify with it very deeply, does not mean it's for us.

Love what you love. But so often we love "everything but the burden," right? There are a lot of articles out there written by people much smarter than I about this subject, so I encourage you to poke around and get familiar with this uncomfortable topic. It's not always clear, there are a lot of gray areas. I will also say that I think it's been happening for so long and is so pervasive that there's not a point at which we [white people] can say "ok I am 100% not guilty of this anymore." Just as we can never say "I am 100% not privileged anymore." What I think we can do is really engage our empathy and try to imagine what it must be like for the folks who have had white people as a group massacre your people, steal your land, force sterilize your women, relegate you to reservations, poison your water with pipelines and coppermines, not to mention rip your ancestry from you completely as was done with chattel slavery. Then imagine seeing white people profit from adopting the very traditions your people were once at best marginalized and at worst exterminated for practicing. Would you still feel entitled to making money off of their traditions, their artworks and their spiritual practices? Have we not stolen enough shit from them? Can you imagine how it must feel to see your sacred objects mass-produced and sold by conservative companies like Free People and Urban Outfitters? Or your styles of hair, dress and music be a liability at work for you but a hip trend for a socialite?

If what you're borrowing runs the risk of hurting someone's heart, is it even worth having?

I'm not saying you can't like something. But borrowing something that's not yours isn't borrowing, it's stealing. If folks are saying PLEASE STOP THIS, we need to honor those requests. We have to clean up our blood karma, as my friend Cristina Orbe said to me recently. We have to accept that we look through lenses of a settler, colonial, capitalist gaze in which anything we see has the potential to be ours. We must stand in solidarity with those who want to actively decolonize.

And while no indigenous people or group has ever "called me out" on my blatant appropriation I can't keep skirting the issue with all my moral workarounds. So this is where it ends:

This is my announcement that I will no longer be making dreamcatchers.

It is no longer congruent with my ethics as an artist to profit from this type of work. Really, it never has been. I’ve never felt 100% comfortable appropriating and selling a white girl version of the indigenous craft even though I took measures to give back, to educate, to honor the people I learned from. I don’t pretend to think the impact of my work is so great I’m doing some grand service here, and deserve neither praise nor applause. I just want to acknowledge that I’m overdue for a bigger calling-out and so I’ll just do it myself, say I’m sorry that people like me creating and selling this kind of work is likely painful for indigenous folks to have to witness, and move on to making other stuff that is just as beautiful. I’d like to offer this final piece measuring 11"x45" as a giveaway to support the indigenous people gathering to protect the water and stop the Dakota Access Pipeline at #StandingRockSacred Stone Camp.

To enter, send a donation of any amount via their Fundrazr page at >>> bit.ly/nodaplfunds <<< and comment here with “DONE.”

I’ll choose a winner at random by midnight PST Friday Sept. 30th. A receipt of your donation will be requested. Thanks to all of you who have supported my art throughout the years. I hope you continue to do so. xo | rachael P.S. You can see more images and video of the piece over on my Instagram "story" >>>instagram.com/rachaelrice