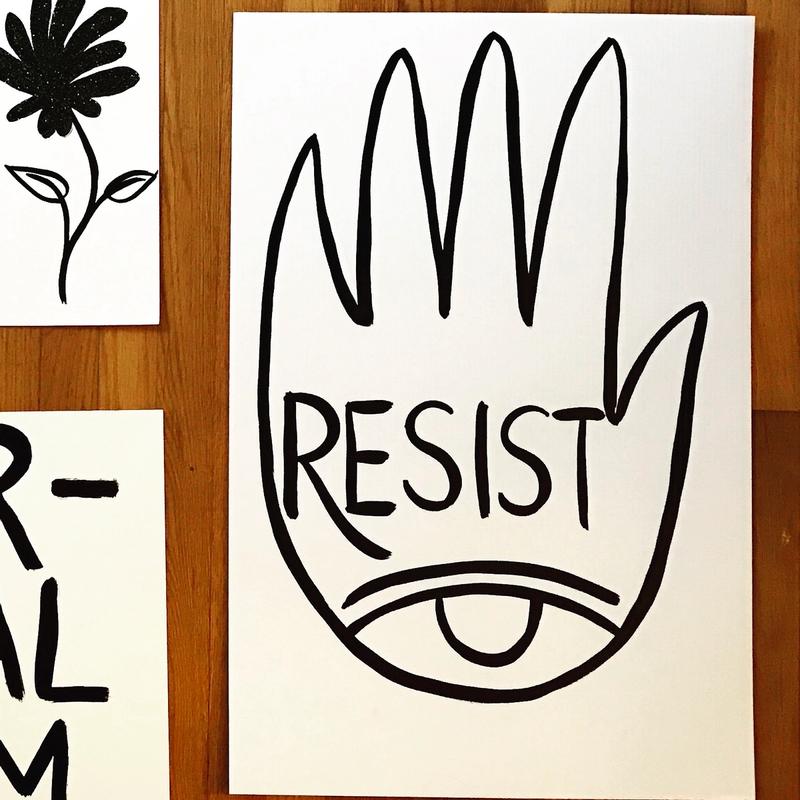 It Wasn't A Protest, It Was A Parade: Notes from the Women's March in PDX

With gratitude and appreciation to Margaret Jacobson and the other organizers.

Having All The Feelings about today's ginormous women's march in PDX. Seeing that many people, some hanging out of skyscraper windows waving flags gave me little of the hasta la victoria siempre-itis for a second and I got a little choked up. I saw a lot of people honoring the gravity of what we face even as they danced. I saw humor and beauty and courage. I also saw a lot -- a LOT -- of white women in pink pussyhats acting like they had just seen each other after 2.5 appletinis and were ready to karaoke I'm Every Woman. I let that go though bc these white ladies are new to protesting and this wasn't really a protest anyway it was a parade.

What fucked me up though was all of this nonsense, because Friday night (before the election) PDX cops tear gassed and shot people in the face with rubber bullets, and their contract was passed last October without public input or purview, included a double dipping policy, and allowed bodycam footage to be "reviewed" before being submitted, and prevented any meaningful independent oversight, and they're on camera assaulting peaceful women of color, and their union endorsed Tr**p and and and::::: this disturbed me to see, over and over again: white women doing for fun what women of color have been punished and killed for.

There's a long thread on Facebook about this with a lot of good discussion not including me calling the march White Feminist Coachella in the comments.

Show me ten thousand women marching into Trump Tower Occupying 610 Park Avenue and Parc East Marching into these sad excuses for a culture And just refusing to leave -- -- Making a life inside of dead spaces. Show me kaleidoscopic fornication on the steps of Trump Palace Show me bank window confetti glitter raining down A march into Bergdorf’s to confiscate all jewels to adorn all wheelchairs and crutches Show me a confederacy of sorrows gnashing and wailing from D.C. to Flint flowers and fangs springing up from each dropped shredded garment Show me permaculture on the White House lawn inside the tent city where Panthers feed the children Show me a wave of divestments And a flood of reparations And a sea of decolonization Washing over the land Show me a march that has both light and heat. I don’t want to see more machinery grinding away under a permit and a pink hat I don’t want to see a parade----- I want to see ---------------------------------disruption.

Some perspectives: An Indigenous woman’s experience at the March in WashingtonA black woman’s experience trying to attend the march in D.C.A perspective about bragging about having no arrests at the marchesSome Inconvenient Truths The Women's March in Washington A perspective of a woman of color: Why I'm Skipping The Women's March Another perspective of a woman of color: I Will Not Be Your MuleAnd finally, a critique of all the critiques of the marches (didn't like them? Get to work!)