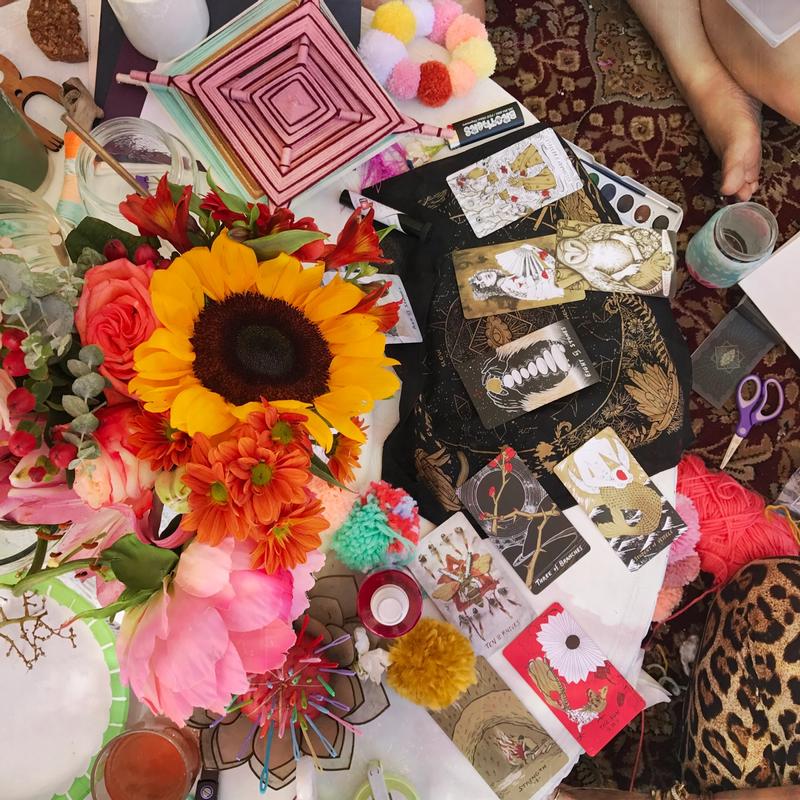 Reflecting upon the deep collective work done at Magical/Radical, I’ve been thinking, as I do, all the time it seems, about cleaving – and about togetherness, and what it’s going to take – what it’s really going to take for us to individually and collectively midwife this time of collapse.

And I’ve been thinking about having an online business, and how I’ve had to burn it down in order to see the moon (a luxury that is a function of my extreme privilege, it must be said), and I’ve been thinking about how the online radical political left is like the moon: a thing I may learn from, but not where I want to live.I forgot, in fact, where I do live, and why, as I slid rapidly in February into a place of feeling that my own annihilation would be the best answer to the problem of Whiteness, and while there may be truth in that, it is in a way too easy – it is much harder to be with these times of no easy answers, these times of the questions themselves being so inadequately framed.

Amid this cleaving I forgot my purpose: I forgot who I was, who I am. Why I am even here. And where is here at, anyway? Fucking Facebook? Is this even a place? This place is all mind and no land. I forgot about all the medicine I was gifted in this life. After all, a gift not given is no gift at all. So I’ve been wondering if perhaps my gifts are best given elsewhere, elsewhen, elsewhy, and elsehow and perhaps the internet, so fertile with ideas, is also too flooded with pain for deep restoration to occur in the comments sections.

I’ve been thinking that “justice” seems so often to look more like punishment, banishment, perfunctory comments demonstrating ideological and semantic purity and smug performative positioning (I have behaved in all of these ways and still do, ugh), or earnest but ultimately futile shufflings of the capitalist deck where every single card pulled is the Tower, in myopic attempts to avoid locking horns with the irredeemability of Empire.

As if we can market our way out of this mess.We can’t. I mean: everything we create is on stolen land. Like, for fucking starters. {Perhaps we can interrogate why we think jobs should even be a thing, why so many answers to oppression require that we increase our power to purchase our safety and our sense of belonging?}

I’ve been thinking about how there’s no spiritual veneer or feminist gloss that will make capitalism acceptable, because equity and capitalism are competing narratives, and framing the world in terms of having value only inasmuch as it provides resources for humans is a death-trap supremacist ideology of Empire and of separation from the more-than-human world. Meanwhile, essential but painful (and less circumspect) conversations with our families, our friends, our schools, and our kids which require more risk and investment go unspoken as it’s really quite a bit easier to post a link and drop memes than to pick up the phone or ruin Thanksgiving by saying, hey what you did was painful, but this relationship is important to me, so can we talk about it?

And so I’ve been thinking about how interrogation isn't the same as critique.

And about how critique isn’t the same as condemnation, just as separating wheat from chaff does not damn the whole harvest.

Just as how the naming of harm isn’t the damning of a soul, and that we can say these things to each other without throwing each other away because I do not believe any human animal is actually literally trash. I’ve been noticing that every step of remedy easily becomes more poison, every solution a slight stutter in the churning gears before it is consumed by the existing ravenous machinery of “civilization” and becomes more of the same.

And really I’ve been pondering how pattern recognition is not divisive, that's it's literally addition – not division – as it counts the thing that occurs repeatedly many times over, accumulating, and how feeling into this deeply is one of the many gifts of shame. It bears repeating: there are gifts of shame, just as there are gifts of anger, because to know these feelings is to know the full spectrum of what it is to be human in the presence of other people, including non-human persons like mountains and spiders, crickets and forests, and amethyst and lilies, and even Climate itshirselves, and to be accountable to them as well.

I’ve been thinking that America and its thug bodyguard, Whiteness, is dying and like other egregores will not go peacefully or quietly or by request. It will die kicking and screaming, bloated and choking yet insatiable like a hungry ghost, and will try to consume and plunder every last bit of life before it expires and because we are all feasting on its excretions we will also resist its death because it means we will have to face some death as well.And so I’ve been wondering about how long it will take before we collectively know that the civil war isn’t coming, it’s already here and the black, brown and indigenous (and, and, and---) bodies felled by police, by the violence of ecocide, by neoliberalism and globalization and the other artifices of Empire are just the first casualties in this war.I’ve been thinking there will be more.

What is going down in Texas is but a taste of what the global south already experiences. And I’ve been considering that maybe, if enough white bodies pile up, we’ll think this thing is real, that it’s here at our flooded and fiery doorstep. And we’ll need our poets and our artists to sing to us some new songs that will touch the truth of our lived experience, that will praise what we have lost and lament what we have done, and this kind of grief will be a new technology, in which all the threads will be traced into some new pattern because tekhne comes from an ancient word meaning “to weave.”

I keep wondering about what it’s going to take for us to survey the damage, stare into the middle distance where the wild edges approach and go, OK. HERE WE ARE, THIS IS OUR LIFE NOW. This entanglement of agencies that I experience in a way that’s so colonized: how can I show up for what’s really going down? I don’t think it’s about finding an acceptable Democratic candidate. I think it’s way too fucking late for that.

I keep thinking, “the chickens are coming home to roost.” And while you can’t make chicken salad out of chicken shit, you can compost the fuck out of it and perhaps offer some new paintings and some new stories that will root and grow here, now, that we can share, like the bread we must become to feed each other when we’re so very hungry, so that we really see each other in this time, doing better than trying in this time of dying – where we’re actually reflecting collectively the life of these questions. And we can offer them up as the poem of our heart and perhaps they’ll be remembered long after we’re forgotten. Perhaps not. But we can say we at least made an offering of something gorgeous, beautiful, real and true.

And so I keep thinking I just want to keep truth-telling in my own discursive, rather pedantic yet consistently lol-worthy way, but that I feel compelled to show up here now in a different manner, not because I’m tired of fighting but because I’m kind of too good at it, and I need to honor the medicine and skills within me that know how to be with as well as how to be against. I’m sorry for the all the harm I’ve done in my self-righteousness. And I want to share this right now, when the light is diffuse from wildfires because I care about all of you and have been deeply witnessed in this space and would like to reciprocate that when possible.

Every single one of you is a treasure.

Towards that end, I was accepted into a program and am starting my hospice volunteer training in a couple weeks as both a continuation of my late mother’s work, but also as a bridge into death midwifery, in order to be more of service to these times that are so affected by the collapse of moribund systems in an evermore frighteningly kaleidoscopic way.

So I’m going to be a death doula to people, but also to the kyriarchy and those who suffer under it. And hopefully be someone who can offer some space for others to do what humans do best: make meaning in a meaningless world. Turns out, I was made for these times.

I’ve been thinking that quite possibly, so were you.

In other news, the last of the sunflowers in our garden are blooming.

With extreme gratitude to: Meg Worden for her support in helping me move into the best health of my life through microdosing cannabis, and for sharing that medicine with the group.Jen Lemen for being the guide of guides and gifting us and lifting us up with stories of social cohesion and real togetherness, and for modeling that when needed most.Marybeth Bonfiglio for holding space for the deep work of epigenetic healing. And for the food. My god, the food.Jaime Lee Christiana for the insanely beautiful tent of a thousand weavings and her lion heart.Nirmala Nataraj for her ability to facilitate exploring one's personal mythical geography and sharing the terrain of our togetherness.Virginia Rosenberg for translating the poetry of the spheres into frameworks of justice and for the late night out-of-control gigglefests.To all of the guides who dropped their agendas and attended to each other as things came up when we needed the very togetherness we desired to experience.To everyone who took the risk to attend this retreat and look at these issues squarely in the face, respond honestly and allow those feelings to bleed into the world. A special shout-out to the women of color who kept it really fucking real, we owe you big. We really do. Jen Knutson who gifted her spot and made it affordable for someone else, that was amazingly generous.Tada Hozumi for their work around authentic allyship.Tad Hargrave for the Robert Bly quote and for the exchange of voice memos and all relevant memes.Mathieu Thiem for the word "inter-animism" and putting words to my understandings about magic and justice.Bayo Akomolafe for his work in the realms of decolonization, indigeneity, Whiteness, the notion of The Crossroads, and the perils and beauty of modern living.Rhyd Wildermuth of Gods + Radicals for introducing me to the word "egregore."To everyone resisting. To the land itself and all who feel its longing.